In January 2015, a mere 11 months ago, Twitter’s founder, Jack Dorsey, endorsed the multi-tweet “twitterstorm” as a clever means of rapid-fire marketing. He wrote:

Dorsey also noted that tweetstorming was a pretty brilliant way to maneuver around the 140-character limit, and that it wasn’t the first time that users had built platform features that Twitter designers hadn’t thought of themselves.

In fact, it took Dorsey a series of 17 tweets to talk about his support of Tweetstorming. Charlie Warzel, of Buzzfeed, chimed in quickly with a response that Twitter’s newest trend was totally out of line and “Must Be Stopped.”  Warzel’s reasonable claim? Get a blog.

Dorsey not only lauded the notion of Tweetstorming, but also the introduction of video, photos, and other improvements like direct messaging and a mobile video camera. Many users cheered along with him. Conversing with a group, privately? Hurrah! Capturing and sharing videos right from your Twitter app? Amazing! The Twitter experience can now be full and rich. With just a few taps, you can add new dimensionality to previously flat and non-immersive text-only media.

By July, the concept and term had become popular enough, and had gained enough ground, that Twitter applied to trademark the word, “Tweetstorm.” No lie.

But, wait. What does this have to do with technical writing?

I cannot imagine the things it does NOT have to do with technical writing.

If I am now able to Tweet a set of user steps as a Tweetstorm, steps 1-12, for example in a series as simple as 1/1,1/2, 1/3 and so on so that users can see my Twitter handle and the steps they take, and I can imbed a photo or video along with what they need to do, or even use a screen capture of an on-site step, or a photo of the machine, the shop, the location or the outcome. I have now crossed over in real-time to becoming the most useful tool in the arsenal.

And if I can sit with a developer or support team member and walk-through the issue that a customer is having with the software we have developed, or I can be in the room with my Development Team and a User Experience Designer, a whiteboard and a Product Owner, and live-tweet the whole experience while we develop the documentation, then the medium gets the message.

This particular use of Twitter moves it from social to business and targets my audience with precision heretofore unimagined my Twitter, but that – in eleven short months – could be elegantly applied by businesses like agile software development in a global capacity with full force, especially by teams of document writers who may be located time zones away.

So, Charlie Warzel, while I sympathize that Tweetstorming is indeed not the proper forum for detailing your last evening’s date or repeating the behavior of the passenger next to you on the airplane, I caution that it may be that tech writers will co-opt Twitter in much the same way that thirtysomethings took over Facebook. 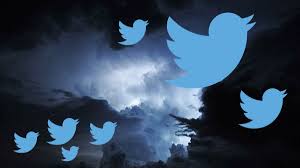 aloshes. There could be a heck of a tweetstorm.

One thought on “Get Your Umbrella Ready – There’s a Tweetstorm Coming!”